Whose Interests Is the House Freedom Caucus Considering? 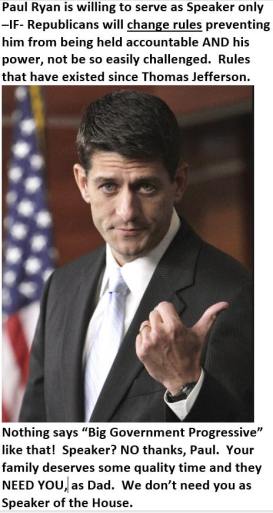 The United States will reach the debt limit on November 5. If the limit is not raised prior to that point, the United States could default on its obligations, but that is not a likely outcome.

Two days ago, Paul Ryan announced that he would run for House Speaker, but only if his demands were met, and were met by Friday. “Mr. Ryan made it clear that he would not accede to preconditions set by “one group,” a clear reference to the members of the hard-line Freedom Caucus, which helped push Speaker John A. Boehner into retirement. Now it may be those same hard-liners who are feeling pressure to fall in line behind Mr. Ryan.” Ryan is demanding support across the Republican conference and says he wants to be “that unifying candidate.” However, polling data reveals that a Ryan Speakership would do anything but unite the party. At least 93% of GOP electorate opposes Paul Ryan on immigration. END_OF_DOCUMENT_TOKEN_TO_BE_REPLACED 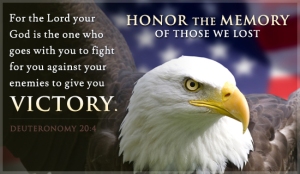 Today there are many pictures of remembrance and reflection on the memorial of 9/11 – the day America had terrorist attacks on our own soil. It rocked our sense of security as a nation.  I was driving into downtown when we heard the news on the radio of the first tower attack. That day Americans stared at their televisions to find out what happened. Our Commander-in-Chief spoke on television that evening assuring Americans,

As a nation, we looked to our leaders to comfort us.  Men (and women) are imperfect, and will always fail us. I want to share a portion of yesterday’s devotion to suggest that instead of looking to each other for comfort and assurance, we need to look to God. END_OF_DOCUMENT_TOKEN_TO_BE_REPLACED

Posted in 9/11, Bring America Back to God, Call to Action, Prayer, Price of Freedom | Leave a comment

I received a response to my letter (see previous article) penned to TX Representative Ed Thompson in the mail yesterday.

He first outlines the House budget of $209.8 billion stating it “provides additional General Revenue in transportation, invests in our public schools, and increases border security”.  He does not address the percentage of the budget for securing our border. Nor does he address my comments: END_OF_DOCUMENT_TOKEN_TO_BE_REPLACED 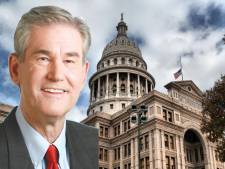 I would like you to know the facts, rather than the talking points Joe Straus gives.  A priority for the legislature should be on closing our border, which I discussed with Emily when I was last in your office, before she chose to dismiss me and walk away, even though I was nothing but pleasant (that sure shocked me and another constituent Cyndy Fussell).  I have to assume that she didn’t pass on my comments that more than 1/2 of 1% of the total biennial budget should be spent on closing our border.  The Senate passed that amount, but the house has earmarked even less. Just like in a household budget, how the majority that is spent speaks as to what you deem as a priority, and apparently the Texas House under Joe Straus does not deem closing our border as a priority.

END_OF_DOCUMENT_TOKEN_TO_BE_REPLACED

Is Texas DMV Competing with ObamaCare Rollout for “Glitches”?

A co-worker (who did not know the law had changed) had her car inspected last Friday (March 13), and she left with her Vehicle Inspection Report (you no longer receive an inspection sticker).  Both her inspection and registration are due in April.  On Monday (March 16), she went online and renewed her Vehicle Registration in the morning. (She did not know that the law had changed, and wondered why it wasn’t better advertised.)  About 10:30 that same night she received an email from the DMV stating that they were not able to renew her registration at this time, but did not provide a specific reason, but END_OF_DOCUMENT_TOKEN_TO_BE_REPLACED